Anyone who has studied elementary physics, or basic fire science, is familiar with the Fire Triangle. For a fire to occur three things must be present:

If any one of these elements is absent, a fire will not occur.

I first remember seeing this demonstrated in a laboratory when I was a high school student. Our physics teacher had a glass container from which all the air had been removed. When a lighted candle was inserted into the vacuum, it immediately went out. No air, which means no oxygen, meant no fire. A lesson never to be forgotten.

In fact, there are two Fire Triangles, and both must be understood if bushfires are to be effectively managed and bushfire damage is to be minimised. They are the Classic Fire Triangle, and the Bushfire Triangle.

The classic Fire Triangle is usually depicted as follows, showing the three critical elements that must come together for a fire to occur: 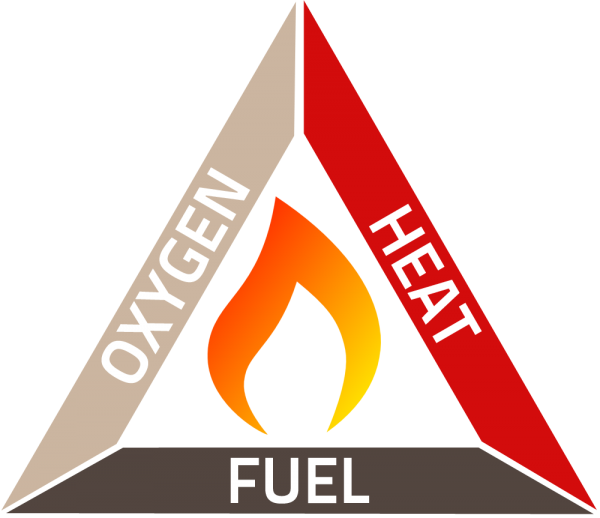 An understanding of the classic Fire Triangle is basic in bushfire management. When a fire occurs in the bush the three essential ingredients are always present: (i) oxygen, which makes up 21% of the air around us; (ii) fuel in the form of leaves, twigs, bark and other flammable material on the bushland floor, and (iii) a source of ignition, which can result from a lightning strike, or from an accident (for example an escape from a camp fire) or through deliberate lighting by a human.

The Classic Fire Triangle provides a key implication for park and forest managers who are worried about bushfires. We know that oxygen will always be present as it is a major component of air, and air is always present in the bush. We also know that fires will always start, one way or another. If not from a lightning strike, then it might be a criminal arsonist … but whatever the source, it is a certainty that a fire will start somewhere sooner or later. So there is nothing the land owner or land manager can do about two of the three elements of the fire triangle, oxygen and heat.

However, the third element, the fuel, can be managed. And this is doubly important because we also know from basic physics that fuel quantity is related to fire intensity. ‘Fuel quantity’ is the amount of flammable material available for burning; ‘fire intensity’ is the heat energy output. Put simply, the more fuel, the hotter the fire, and the hotter the fire, the harder it is to control in the bush. Bushfires also spread faster in older fuels because the fuel structure, or the way the fuel is arranged, is more hazardous.

Managing fuel is therefore a critically important part of bushfire control. If bushland fuels are reduced and their structures simplified, then the fire’s intensity and speed are reduced, making the fires less damaging, easier, cheaper and safer to control.

There are many ways fuels can be reduced, for example mulching or grazing, but in the bush the easiest way is by burning carried out under strict controls in mild weather conditions.

There is a second triangle that bushfire managers need to understand. This is the Bushfire Triangle, which explains how a bushfire will “behave” once ignition of fuel has occurred.

All fires “behave” differently. There is no such thing as a “standard” or “normal” bushfire. Under certain conditions a bushfire will be of low intensity, a so-called “cool burn”. In a cool burn, the fire trickles slowly through the leaves and twigs on the ground, with flames only about ankle- or knee-high. Cool fires are often almost circular, and they are also discontinuous, leaving behind unburnt patches. A cool fire can be easily suppressed by raking a firebreak around it, or by dowsing it with water.

But when weather conditions intensify, a fire can behave very differently, surging through the bush consuming everything in its path, with flames higher than tall trees, burning embers streaming in front of the headfire, and reaching an intensity so great that humans are powerless to extinguish it.

High intensity bushfires burning in eucalypt forests can usually only be controlled if the weather changes, or if the fire runs into an area where the fuel has been reduced or removed.

The picture below is a cool burn in wandoo forest, the other is of an intense fire in the jarrah forest:

The Bushfire Triangle helps us to understand how a fire will behave, once it is lit. Again there are three critical factors: the weather, the topography and the fuel, as illustrated in this diagram: 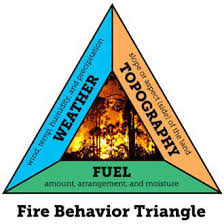 I have already described how the quantity and the arrangement of fuel affects the behaviour of a fire. The more fuel there is, and the drier the fuel, and more loosely it is compacted, the hotter it will burn. At one extreme, saturated fuel (as a result of rain or flood) is completely non-flammable; at the other extreme, forest fuels that have dried out in a three-year drought becomes tinder dry, is easily ignited and then burns furiously.

The effect of changing weather conditions on fire behaviour is intuitively understood. I think everybody realises that the hotter the day, the lower the humidity and the stronger the wind, the more intense and fast moving will be the bushfire. Of the key weather factors, the most important is wind. Gale force winds not only bring in fresh oxygen and drive the flames into unburnt fuels, they also pick up burning embers and deposit them downwind. These become the “ember storm” that is so destructive to buildings in the path or the fire, or the “spot fires” that start up way ahead of the main fire and make things so difficult for firefighters.

Topography is also important. Fires always burn more rapidly uphill than downhill. In steep country, fires burning uphill can be impossible to control, while the same fire burning downhill on the opposite side of the ridge offers firefighters a chance. Fires in mountain country are difficult to get to, the construction of firelines is difficult, and they are affected by swirling and unpredictable winds.

The Bushfire Triangle is the basis of the science of Fire Behaviour Prediction. Since the 1960s, Australian fire scientists have studied and measured fires under a vast range of conditions. This has enabled them to develop “fire behaviour equations” that integrate weather, fuel and topographic variables, which in turn enable fire behaviour to be predicted. In Western Australia, two forest fire behaviour models have been published, known colloquially as ‘The Project Vesta’ model and ‘The Red Book’. 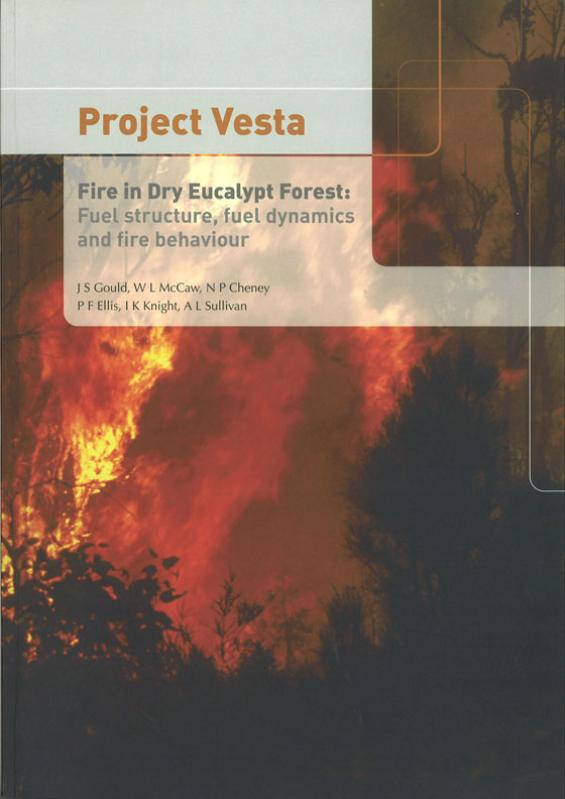 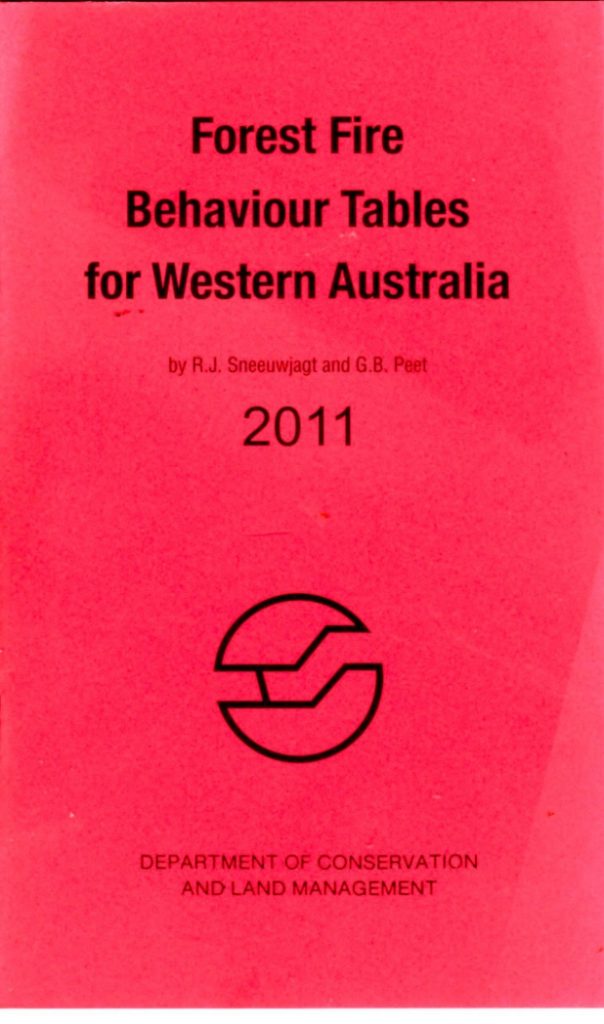 Knowing the temperature and humidity, weight, structure and dryness of the fuel, the wind strength and the slope of the ground, a modern bushfire scientist can predict the speed at which a bushfire will burn, its flame height, intensity and its ability to generate spot fires. With this information the shape and size (length of fire perimeter) and likely damage of the fire can be predicted, and the control strategy developed.

The fire behaviour equations also allow us to “prescribe” the best conditions under which a fuel reduction burn should take place. A land manager can specify in advance the range of temperatures, humidity, fuel conditions and wind which will generate a burn of the desired intensity and rate of spread.

The Classic Fire Triangle explains the components that must be present before a fire will occur at all. It helps us to develop an effective bushfire strategy (only one factor, the fuel, can be controlled).

The Bushfire Triangle explains how a bushfire will behave once it has started. This understanding enables us to predict the behaviour of wildfires and to prescribe the most suitable conditions for fuel reduction burning.

Roger Underwood is a former District and Regional Forester in Western Australia, with over 60 years experience in bushfire science and operations. He is Chairman of the Bushfire Front Inc, an organisation devoted to improving bushfire management in Australia. This is a Bushfire Front publication.